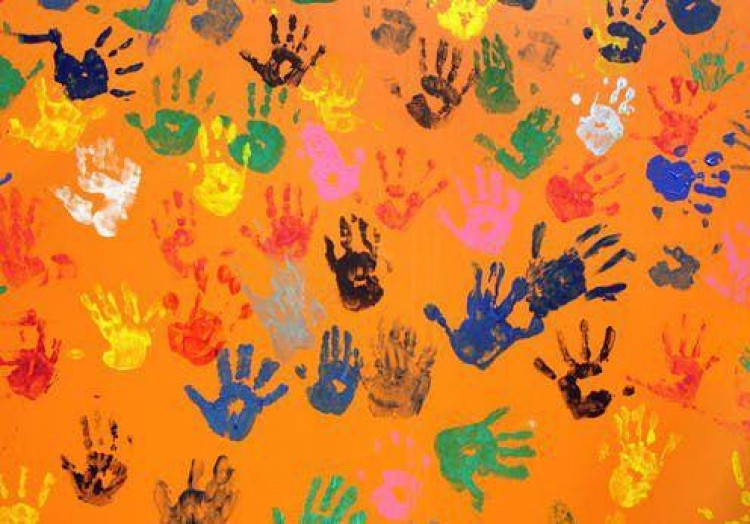 Fingerprints are those little ridges on the tips of your fingers. They’re essentially folds of the outer layer of skin, the epidermis. The “prints” themselves are the patterns of skin oils or dirt these ridges leave behind on a surface you’ve touched. Your fingerprints began to form before you were born. When a fetus starts to grow, the outside layer of its skin is smooth. But after about 10 weeks, a deeper layer of skin, called the basal layer, starts growing faster than the layers above it, which makes it “buckle” and fold. The expanding lower layer ends up scrunched and bunched beneath the outside layer. These folds eventually cause the surface layers of the skin to fold too, and by the time a fetus is 17 weeks old – about halfway through a pregnancy – its fingerprints are set.

Although this folding process might sound random, the overall size and shape of fingerprints are influenced by the genes you get from your parents. So you probably share some fingerprint patterns with your family members.

But the details of your fingerprints are influenced by many other factors besides genes. For example, the shape and size of the blood vessels in your skin, how fast the different layers of skin are growing, and the chemical environment inside the womb all play a part. No two people end up with exactly the same fingerprints, even identical twins.

It was only in 2015 that a big long-term study showed that fingerprints are stable over a person’s lifetime. The ridges of a fingerprint are visible on the skin’s surface layer, but the pattern is actually “encoded” below that. Even if you have a major skin injury, your prints will come back when the outer layer heals – though you might have a scar, too.

So your fingerprints are totally unique to you and have been since before you were born. No matter how much you change as you grow up, you’ll always have the set you have now, no matter how long you live.

Surprisingly, nobody really knows what fingerprints are for.

People have long thought that fingerprints provide the friction that helps our hands grip objects. This makes sense because the other animals besides human beings that have fingerprints – including many other primates like apes and monkeys, and koalas – are all tree climbers.

But sometimes what makes sense isn’t true, and a recent study found that fingerprints don’t really help people hold onto things – at least, not things with smooth surfaces.

Other possibilities are that fingerprints improve your sense of touch or help protect your fingers from injury. But scientists don’t know for sure yet.

Making use of your prints

Police have been using fingerprints and their unique loop, whorl and arch shapes to help catch criminals for more than 2,000 years, starting in ancient China.

Fingerprints are now used for many other things as well, all based on the fact that each person’s fingerprints are different. You can use that unique code to unlock your phone or enter a restricted area, for example. In Malawi, fingerprints have been used to identify farmers who have taken out loans. They can even be taken from babies and used throughout the person’s life to access their immunization records.

Police forces are still finding new uses for fingerprints, too. As fingerprint detection and study methods have improved, detectives can even use them to see who threw a particular stone. Those little ridges can hide tiny amounts of substances too – which means they could be used to detect the use of illegal drugs like cocaine and heroin. And now forensic scientists can detect decades-old fingerprints, too – maybe allowing detectives to solve really old crimes – with a new technique that uses a color-changing chemicalto map the sweat glands within your fingerprints.

Here’s Why Your Candidate’s Experience Matters in Background Screening